Peach Salmonella Outbreak is over

By Bill Marler on October 17, 2020 in Salmonella Information

A total of 101 people infected with the outbreak strain of Salmonella Enteritidis were reported from 17 states. Illnesses started on dates ranging from June 29, 2020, to August 27, 2020. Ill people ranged in age from 1 to 92 years, with a median age of 43. Sixty-four percent of ill people were female. Of 90 ill people with available information, 28 hospitalizations were reported. No deaths were reported.

In Canada total, there were 57 confirmed cases of Salmonella Enteritidis illness linked to this outbreak in two provinces: Ontario (41) and Quebec (16). Individuals became sick between June and August 2020. Twelve individuals were hospitalized. No deaths were reported. Individuals who became ill were between 0 and 91 years of age. The majority of cases (60%) were female.

Whole genome sequencing analysis showed that an outbreak of Salmonella Enteritidis infections in Canada was related genetically to this outbreak in the United States. This means that people in both outbreaks were likely to share a common source of infection.

Epidemiologic and traceback evidence indicated that peaches packed or supplied by Prima Wawona or Wawona Packing Company were the likely source of this outbreak. On August 22, 2020, Prima Wawona recalled bagged and bulk, or loose, peaches that they supplied to retailers nationwide. See FDA’s notice for a list of recalled products. Recalled products are past their shelf life and should no longer be available in stores.

By Bill Marler on September 01, 2020 in Salmonella Information

As of August 31, 2020, a total of 1,012 people infected with the outbreak strain of Salmonella Newport have been reported from 47 states. 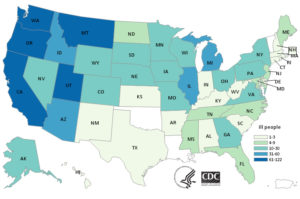 Individuals became sick between mid-June and early August 2020. Sixty-six individuals have been hospitalized. One individual has died, but it is not known if Salmonella contributed to the cause of death. Individuals who became ill are between 1 and 100 years of age. The majority of cases (55%) are female.

Whole genome sequencing analysis shows that an outbreak of Salmonella Newport infections in Canada is related genetically to this outbreak in the United States. This means that people in both of these outbreaks are likely to share a common source of infection.

Thirty-four illness clusters have been identified in 13 states. Information was collected on 23 of the 34 clusters at restaurants and grocery stores. Information from these clusters shows that many ill people ate red onions and other types of onions. Investigations conducted by states and FDA determined that all 23 restaurants and grocery stores served or sold red, yellow, or white onions. Seventeen of the 23 (74%) served red onions, 13 (57%) served yellow onions, and 10 (43%) served white onions.

The traceback information collected from several of these illness clusters identified Thomson International, Inc., of Bakersfield, California, as a likely source of red onions. Due to the way onions are grown and harvested, other onion types, such as white, yellow, or sweet yellow, are also likely to be contaminated. Traceback is ongoing to determine if other onions are linked to the outbreak.

By Bill Marler on August 11, 2019 in Salmonella Information

The Chicago Department of Public Health (CDPH) is investigating an outbreak of Salmonella, a bacteria that is a common cause of food poisoning. Since the beginning of July 2019, at least four people became ill after consuming pork tamales or carnitas served from the deli section of the Sun View Produce establishment at 6110 W 63rd St, Chicago, IL 60638.

If you have pork tamales, carnitas or other hot foods purchased from the deli section of this establishment since July 1, 2019 in your freezer, do not eat—discard.

If you ate food purchased from the deli section since July 1, 2019, you may have been exposed to Salmonella. If you are experiencing severe diarrhea, symptoms of dehydration or high fever, seek medical attention.

As of August 5, 2019, implicated food items are no longer available at the store. There is no evidence that food made after this date was contaminated. CDPH performed an environmental assessment of the grocery store and provided guidance on safe food handling practices and environmental cleaning to prevent further spread of disease. CDPH has also issued an alert to area physicians about the outbreak, providing medical guidance.

Salmonella symptoms usually last four to seven days and most individuals recover without any treatment. Most people who are infected develop diarrhea, fever and abdominal cramps between 12 and 72 hours after eating contaminated food. Although most infections resolve without antibiotics, older individuals or those with weakened immune systems may need medical evaluation and treatment.